Typically all optical beams of a setup should be in one plane parallel to the table top.

This principle makes the whole setup predictable and safe, as everybody always knows where to expect (possibly dangerous) light. Also it makes it easier to install laser shielding (e.g. a wall around the setup).

A simple means to achieve this goal is by defining the beam height before starting to build the setup. This can be done by mounting an iris or alignment disc with its hole on the desired beam hight. Then this tool can be used for any further alignment. 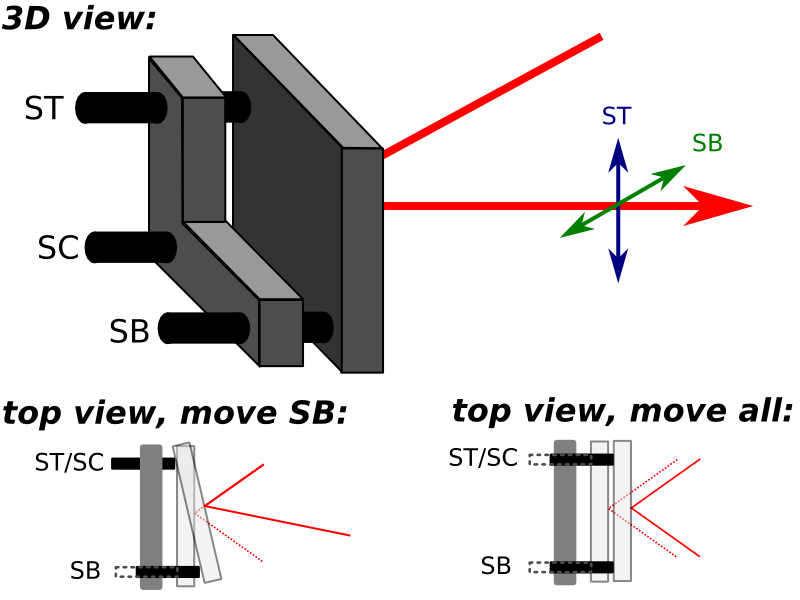 The mirrors in the OpenSPIM are all mounted in kinematic mirror mounts. These mounts allow to flap the mirror around two perpendicular axes:

Aligning a laser beam in space 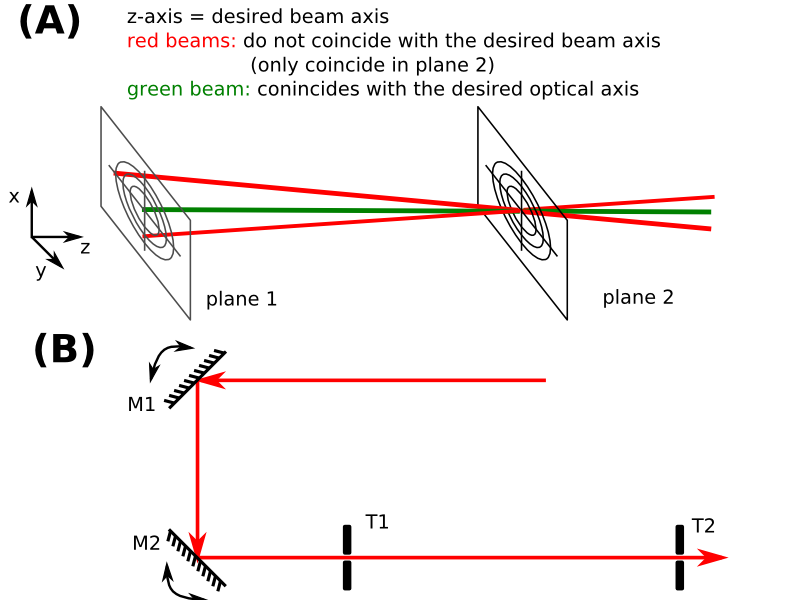 Alignment of a laser beam in space

Each laser beam (in space) is defined by four free parameters (a position x,y on a plane in space and a direction defined by two angles). This can be seen in the figure (A) on the right, where all beams hit the same point on a plane (2), but only the green beam is parallel to the z-axis. So to align a laser beam in space (e.g. parallel to an optical rail, as in the OpenSPIM), it needs to go through two points in space (e.g. two alignment discs or irises).

Figure (B) on the right shows a typical setup to align a laser beam in space. It uses two mirrors M1 and M2 (on kinematic mounts, i.e. with two degrees of freedom each) and two alignment discs or irises (targets T1 and T2). In the OpenSPIM this appears e.g. with the two mirrors directly behind the laser, which allow to align the beam parallel to the optical rails. To align the beam, follow these steps:

The crucial point here is to use the first mirror to align on the first target and the second mirror for the second target.

Estimating the focal length of a lens

There is an easy way to estimate the focal length of a lens. You will need a far away light source (e.g. a lamp at the other end of the room) and a white wall or sheet of paper.